For the first time in 5 years I did not set a PB at UTA100… and I am thrilled with my race!

After the disappointment of UTMB in Sept 2018, I took some mental and physical downtime. I embraced poor eating choices with great gusto and quickly inflated! By early 2019 injury, professional and personal setbacks had all led to a pretty negative headspace.

I sat on the fence about competing at UTA, because I knew I was unlikely to run well given my injured/unfit state. But I was also uncomfortable being the person that refused to toe a start line because I was afraid of expectation and disappointment. On March 1st, having not run a single step for nearly 2 months, I committed to UTA100. It was the most unfit I have been in over 5 years and an 11 week preparation from the couch was pretty scary!

Every training run missed the mark by a mile. I tried not to compare, but good old Garmin let me see I was running worse than 4 years ago on a daily basis!

A month out I found myself verbalising all the excuses in the world to friends about how I was just going to ‘cruise and enjoy it’ because I couldn’t expect any reasonable time. I was heavier than I had ever been coming into a race and fear was getting the better of me.

Fortunately my cool, calm mentor Hanny Allston, got me back on track, with a simple question…..what did I want out of the race? It sounds cliché, but I wanted to be brave and to leave nothing out on the course. I wanted to race! Hanny calls it “leaning in”. I think of it as a willingness to suffer and not back down.

In the weeks before the race, I saw an old film of my Dad xc ski training and he said he’d had a Norwegian coach who only ever asked one thing at the end of each race…. ‘Are You Satisfied?’ It’s a tough one to wrap your head around, but if you honestly do all you can on the day, then your time and place become irrelevant. Having said that, it is bloody hard to honestly say you did all you could in a race. I’m not sure I’ll ever 100% get there, but this year I came as close as I ever have.

Alright, enough of the introspective waffle….. Race Day! One of the main reasons I was keen to race was because my insane, ‘tough as nails’ mother had decided to do the UTA50 after her wildly successfully UTA22 in 2018. She’s 72. I’d have to still be racing ultras in 31 years time to match her…which quite frankly, sounds terrifying! 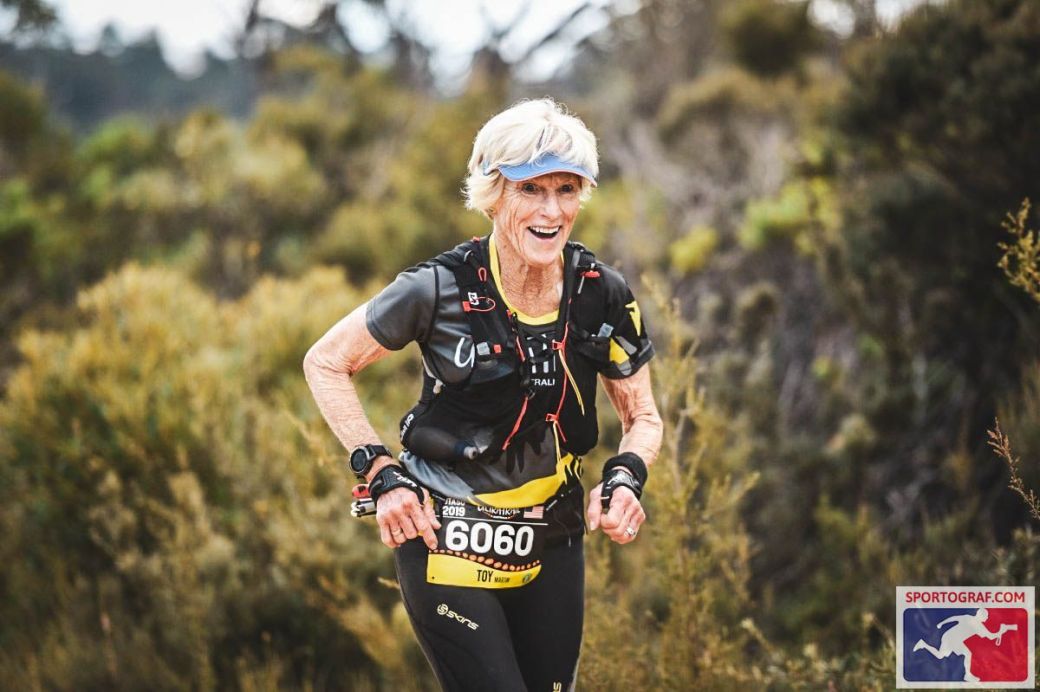 I love the planning, training and detailed preparations that goes into pinning on a number. Getting to share that with Mum while we both got ready for our races was super fun! She was an Olympic Speed Skater and her insight into mental race tactics is fascinating. Seeing that deep desire to compete, no matter your age, is inspiring. She said that she heard that word, along with “how old are you?” more than 20 times last Saturday. Better that than seeing the sweep I reckon! 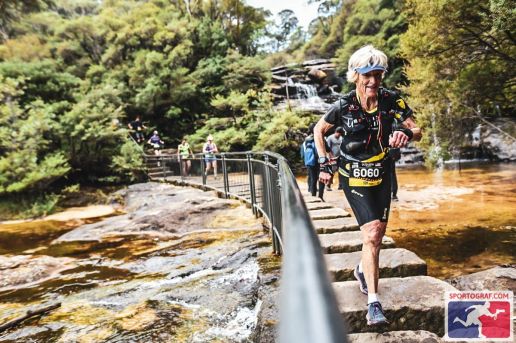 Saturday morning. The gun goes off and I was excited and happy. There were over 80 people from my running group (Trailblazers) on course and it was extremely social out along Narrowneck! I got to spend a bit of time with Nikki, my bestest training buddy and we had a joke about a great quote from Courtney Dawaulter “The finish line won’t come to you. Head down, keep moving… maybe there will be nachos waiting!” only we’ve changed it to Ben and Jerrys for Nikki! This was the year Nikki was gunning for a silver buckle (sub 14hrs) and it was so exciting knowing it was within her grasp. But I was trying to not make a big deal out of it so as not to add pressure. She is already plenty practised at piling on her own pressure 😉

I knew being conservative to the Aquatic Centre (57km) was going to be essential and I successfully kept myself in check through to Dunphys (32km). I was leap frogging with my friends Colm and Elissa and I tried to remain calm as they pulled away from me time and again.

Up the Ironpot Ridge that never gets any flatter. At least this year I was not puking on the top, ruining the ambience of the local didgeridoo players. I was being quite restrictive on my fluid intake because I’m convinced it is one of the main reasons I spend so much time puking in races.

Over to Six Foot aid station (46km) and I was stoked to catch sight of Colm and Elissa again. I was also practically punching the air because for the 2nd time in UTA history, I had made it to Six Foot without turning into Pukey Pukerson.

Off we trot to Nellies Glen and the dynamic duo (C + E) drop me….again! I felt pretty strong climbing Nellies and as I came into the Aquatic aid station (57km) I caught sight of C + E again… Anyone seeing a theme here?

As I trotted off towards Echo Point I mentally moved out of the ‘well under red line’ part of the race to the ‘time to be more honest’ part of the race. I dodged small children and friendly tourists and then I saw Colm doing a bit of yoga on the side of the trail. He was having some cramping issues and I wished him luck feeling relieved it wasn’t me. I hit the Giant Staircase descent…….AND OH MY GOODNESS…….Cramp Land hit me hard and fast… there’s karma for you! Both calves and hammys went ridged as I minced my way past old ladies gripping the side of the staircase railing. By the time I hit the bottom I couldn’t put either heel on the ground. Salt tablets came out and I tried to be Taylor and Shake It Off! For me, it’s such a tightrope to walk between avoiding the puke and avoiding the cramp.

By Leura Forest salt magic had got me moving again and I passed some UTA50 people going home. I wondered where Mum was and hoped she was picking up places on her way to the finish line!

The stairs, the stairs, oh they last a while. I actually don’t mind climbing….give me that over fast fire trail running any day. Progress was steady and I popped out onto Sublime Pt Rd. One of my goals for this race was to run every step of Sublime Pt, Hordern Rd and Kings Tableland Rd. I’ve never managed it before. I got my trot on and just as I was starting to think it was a very stupid goal, I saw my friend Tash, who was volunteering. She was so excited, I couldn’t very well walk while she was cheering!

Leaving the Golf Course I heard footsteps behind that I could now identify without even looking…..Elissa promised me she was not meaning to stalk me and I told her I didn’t believe her 😉

We ran all the way through to Hordern Rd together and it was actually good to have someone close by keeping me honest in my pace. I think we were both pushing each other along.

The Hospital (78km) aid station energy was the great boost it always is. As an added bonus, my amazing mate Pip was there to help crew me. In and out in 2 minutes flat. Apparently she got held in a road block and had to set a PB down Kings Tableland Rd running to get there……THANKS PIP, YOU SUPERSTAR.

Now I was out of the ‘honest’ section of the race and into the ‘commit and hurt’ part. For the first time ever, I put on music in one ear. I threw caution to the wind and pounded down Kedumba Pass like my life depended on it. Crossing Jamison Creek and starting the climb I realised I’d really cooked my legs on the descent… nothing to do now but lean in.

All the way across the valley I tried to lift the tempo and get further along as it got darker and darker. Up to the Hallelujah field and I saw a light coming up behind me moving quick. I was praying the footsteps sound like a heavy man….but alas no, Elissa caught me with less than 5km to go. She trotted past lightly and my concrete legs just would not match her pace.

Through the Leura Forest and I passed some intrepid 50km ladies having a little sit down break. My head was getting wobbly because then I saw 6 fluro vest medical guys going to assist the ladies. I thought it was a bit of overkill; the ladies all seemed fine. When the 7th fluro medical guy asked if he could switch bibs with me I realised they were all 100km runners going out on their Hospital loop, not medical staff!

Stumble, trot, hike, shuffle. At this point I was fully committed to the pain cave. And then the blessed Furber Steps appeared. I’m always so grateful when I hit them because there is less than 20 mins of hurt left.

Finish chute and Mum was there. She had absolutely crushed her 50km in 9hr23min, finishing 8th in her age category which happened to start with ladies 12 years her junior! 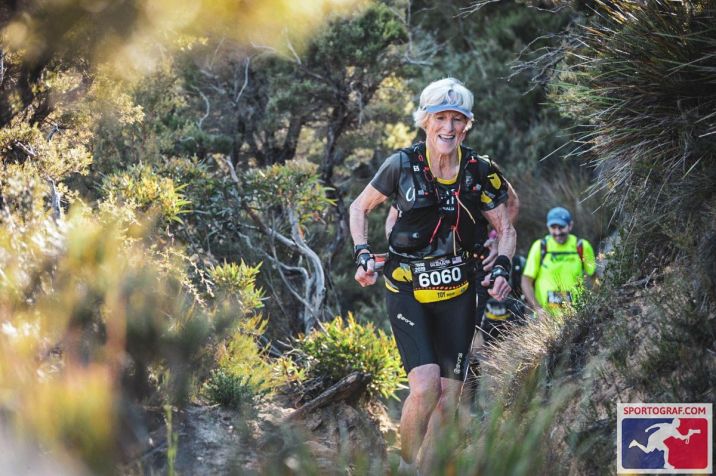 I was elated with my finish and I had not even looked at my watch. Rather the point I suppose. My happiness had nothing to do with time or place and everything to do with being willing to commit and lean in.

Ended up 11th girl in 13hrs4min. 28 minutes off my PB and my most satisfying UTA result to date.

And yes…..Nikki got that silver buckle she so well deserved!