Here goes my second ever race report. I’ll try to keep it shorter than the last one!

Post UTMB, I did exactly what you’re meant to avoid….I immediately entered another race. The come-down from these big adventures can throw you. Suddenly there’s no goal and I don’t enjoy the sense of aimlessness.

UTCT (Ultra Trail Cape Town 100km) was in a country I’ve never been to and the photos looked amazing. My friends, Rocco and Sally Smit were going and I casually thought it’s only 100km; it has similar elevation gain to UTA (UltraTrail Australia); how hard can it be…

Off I went to Cape Town and had a few fantastic days being a tourist—penguins, baboons, the Cape of Good Hope, getting a Cablecar up Table Mountain to see the views I might not appreciate in the race. The scenery was out of this world. 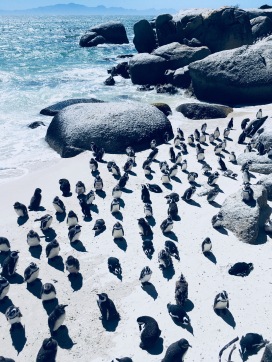 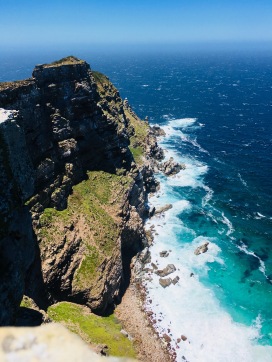 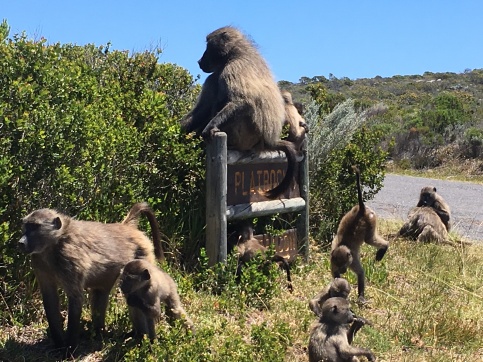 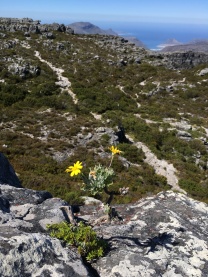 On Thursday I went to the Elite Q & A. Ryan Sandes (South African trail running deity) was asked what time he thought the lead men would run. A tiny lightbulb blinked in my brain when he said that he didn’t think the times would be that fast because there weren’t any ‘throw away kms’ on the course. Maybe this wouldn’t be the cruise-fest I planned?

4am Saturday morning. Rocco and I stood on the start line. It was in a residential area and the organisers weren’t allowed to make too much noise. The crowd started moving and Rocco and I were trying to decide if the race had actually started because there wasn’t any “GO”!

I always find the first 15km really tough. It takes me time to settle into a rhythm. After my near passing out early on at UTMB, I was absolutely determined to run really comfortable for the start of this race. We cruised through the dark streets of Cape Town and climbed up towards Lion’s Head. About 6km in, I could feel myself edging towards the ‘red zone’ and told Rocco I was going to back off and hopefully I would see him again later.

As we crossed over from Lion’s Head to Signal Hill the sun started to come up over Cape Town and the view was something else. 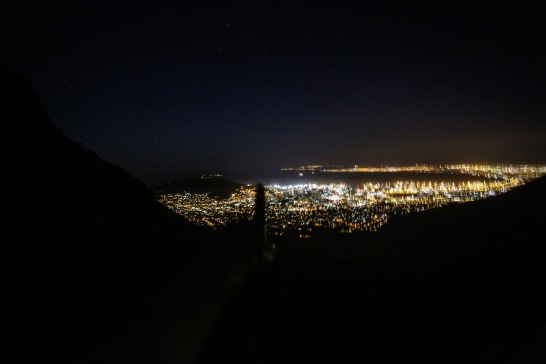 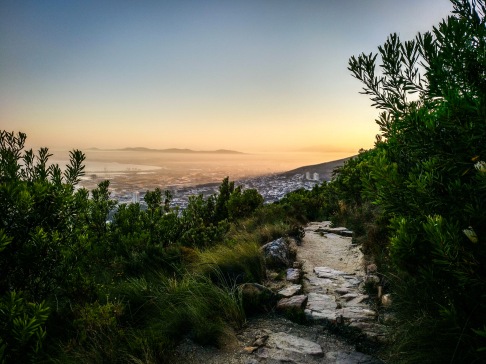 Through the second aid station at Kloofnek (19km) and I was starting to relax and find my groove. We started up Table Mtn and bang, down I went onto the rocky trail. Both kneecaps were bleeding and it hurt enough to make me nauseous. A little walk and I gathered my composure as we hit the famous Plattekilp Gorge. (Picture below from my sightseeing day!) 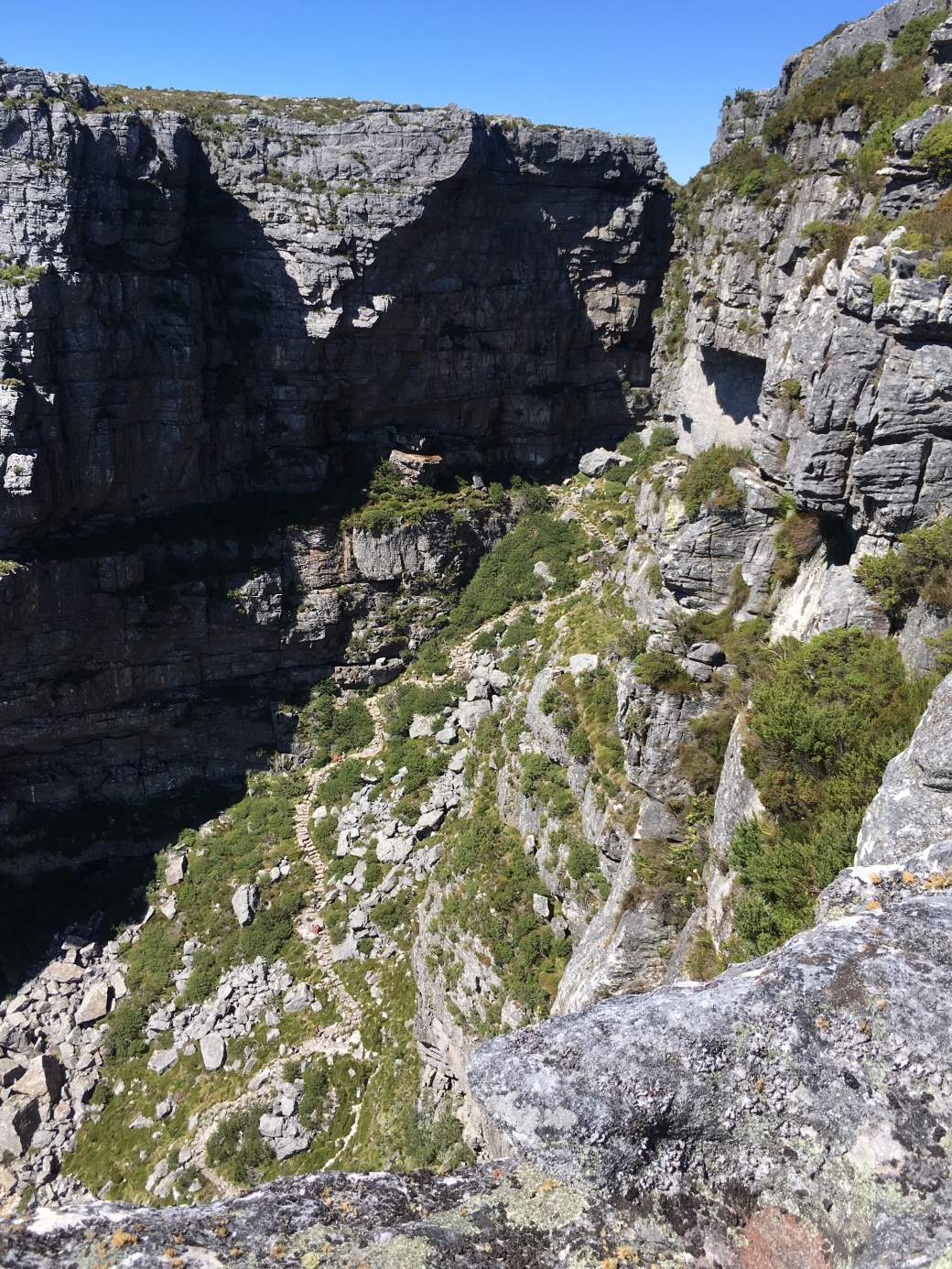 Often what you fear (the climb up Table Mtn and the heat) ends up being harmless. Other unknowns come and kick your arse instead. The climb was a conga line but we were making steady progress. The fact that there were quite a few very overweight tourists charging up quite well, kept the “runners” a little honest 😉 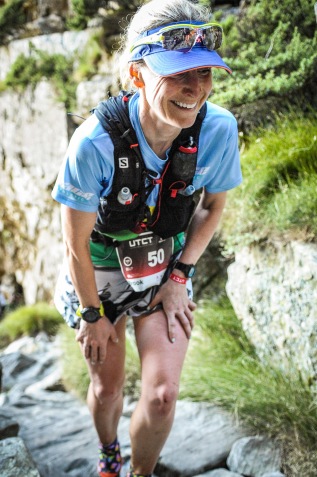 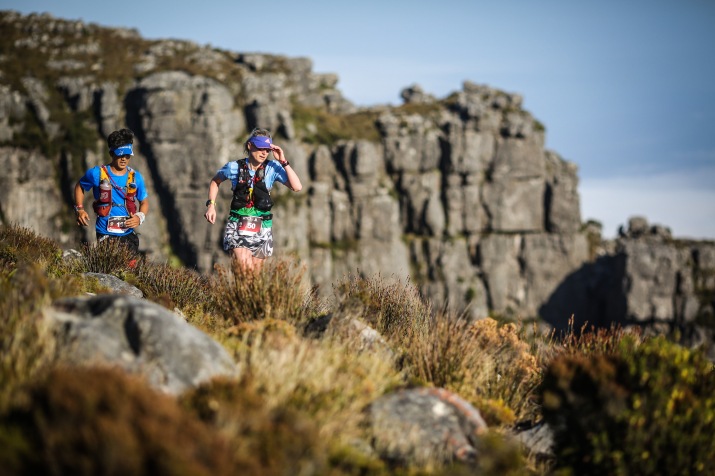 We popped out the top and I had legs to run! Was feeling super proud of myself for about 15 minutes, but this wonderful sport doesn’t let the ego get big for long!

4 near face plants later, I realised that if I wanted to keep my front teeth in my mouth and knee caps unbroken, I was going to have to up my technical running game. I like technical running and usually feel pretty comfortable. The problem was I had a preconception that once I got to the top of the mountain I was going to cruise along a smooth track and race down the other side like a gazelle. The reality was me picking my way along the rocky track like a wombat! 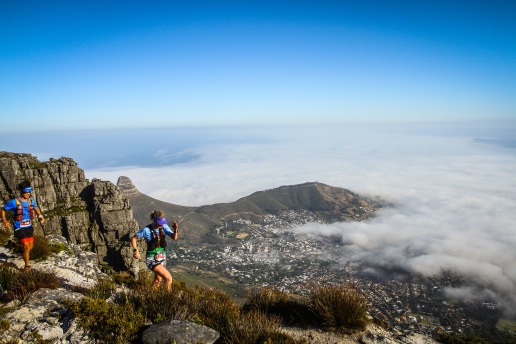 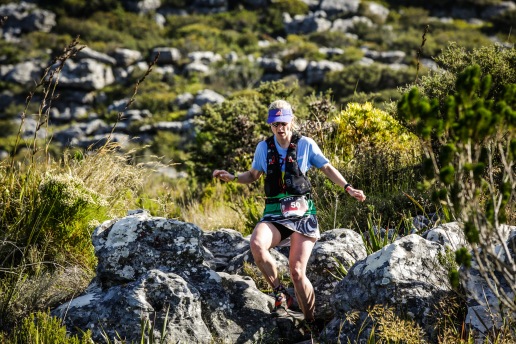 My 3 goals for this race was to try to run a smart race tactically; work on keeping my head positive and to be religious about my nutrition/hydration. Not even 30km in and I was starting to panic about how slow I was moving across the flat terrain. Hmmm….not meeting goals!

I went past some spectators and they had music pounding. They were fist pumping and singing “Girls rule the world” at me. It’s funny how the smallest thing can be so uplifting. I laughed with them and decided that I needed to focus on one small good thing, every time I was feeling demoralised. Those cheering girls were my positive at that moment.

Through the next aid station and we finally hit some runnable firetrail. I was determined to appreciate and take advantage of the less technical running sections now. A lovely man yelled that I was the 10th girl but I didn’t know if he was counting 60km or just 100km girls in that.

Down we came to Constantia Nek (37km) and I was only 1 hour in front of the cut off and felt like I’d run 50+km! I’ve never been so close to a cut off and was a little unnerved. This was the first race I had done with no Support Crew and I managed to refuel from my Dropbag quickly (although not as quick as when I have speed demon Mum there!).

So far, I had been sticking with the 1 hour alarm on my watch and making myself have some gel or Shot bloks every time it went off. I hadn’t thrown up but had been pretty queasy. I was trying not to go overboard with the fluids because that usually results in projectile puking which I was dead keen to avoid.

As I headed towards the coast I felt sluggish. I was trying appreciate that it wasn’t as hot as I had expected. Suddenly I was face first eating dirt and rocks for the second time. More blood, but otherwise unscathed.

I was running by myself a lot at this point and as we descended to Llandudno (45km) I picked up another girl; a good boost. Off I went across the beautiful white sand. 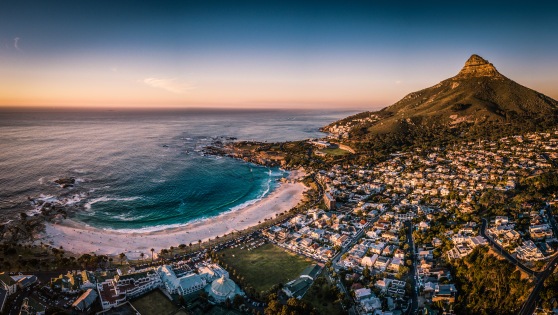 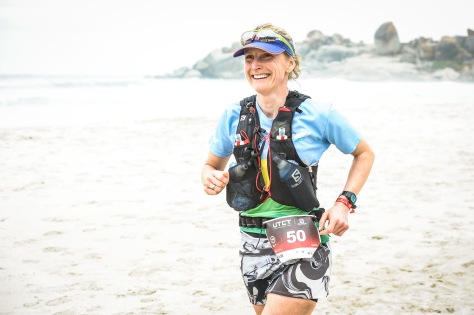 Following a narrow sandy track with scrubby bushes, I rounded a corner and was a tad disconcerted to see a very rotund naked man walking towards me. My pace increased exponentially and I turned into a speed queen! Was quite relieved to come out onto the next beach where there were many more naked people! Way less concerning to be on a nudist beach than to just see a random naked hiker!

Got into boulder hopping mode for the next section and then climbed uphill. Felt strong and a couple runners sitting on the ground at the top told me I was a machine. I felt pretty chuffed with myself. That climb was supposed to be brutal but I was fine and was headed off down to the next aid station. Oh the foolishness….

I headed towards a volunteer who was scanning our numbers. He smiled like Crocodile Dundee and pointed me uphill?!? “That’s not a knife…THIS is a knife”.

It was incredibly steep. The mental image of me gracefully leaping up rocks like Emelie Forsberg and the hand/knee/belly crawling moves I was actually making, were light years apart! Note to future self: When you see a 2 hour race leader prediction time for a 14km section…. be wary!

Into Hout Bay (60km) and I found Rocco again! We were laughing (a little hysterically) about how badly we’d underestimated the race. A lovely volunteer told me I was 6th girl and that now I had an easy road/trail section for 10km. Little did she know that flat running strikes fear into my heart!

Rocco and I trotted along together for a while but again he pulled ahead. I was in the pain cave and needed to let him go. I got my music on and tried all sorts of tricks to keep the pace up.

We came into Constantia Nek (70km) together and I contemplated changing shoes; my foot was really hurting. It was probably my brain trying to pull a swifty on me to get a longer break, so I ignored the idea. I left Rocco sorting out his nutrition. The next section was through grape vines and a lovely forest. My legs came back to me and I didn’t even resent the people on the vineyard restaurant deck drinking wine as I passed!

Got myself through the next aid station quickly and knew I only had 2 more climbs to go. I started passing people that were on the 60km course and they were all super encouraging. Then a couple of them started telling me I was only 7 mins behind the next girl. Time to put on my big girl pants and have a crack! 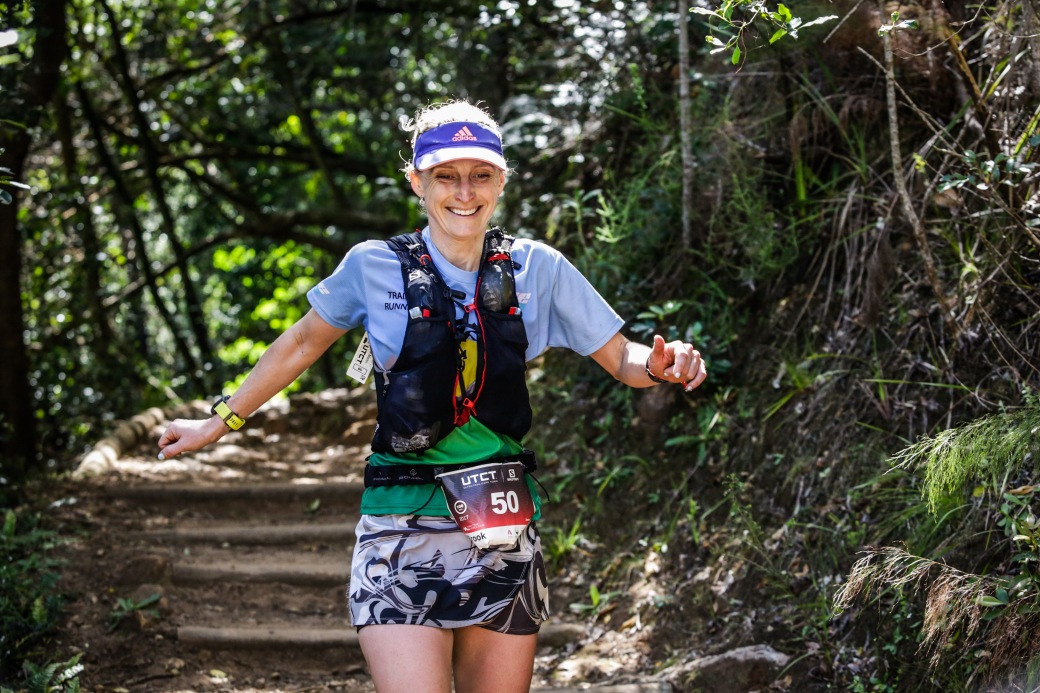 I caught the next girl (Teresa Nimes) coming into the last aid station (90km) and recognised her from UTMB. Once she saw me, she put the foot down and we left the aid station together. We hit the climb and she just blew me away. I was in Struggle Town but kept trying to move as quick as I could. I got up onto the contour track and turned into a crazy headwind. I must have looked rough because a volunteer asked if I needed assistance 😉 I shook my head and gave him a thumbs up. 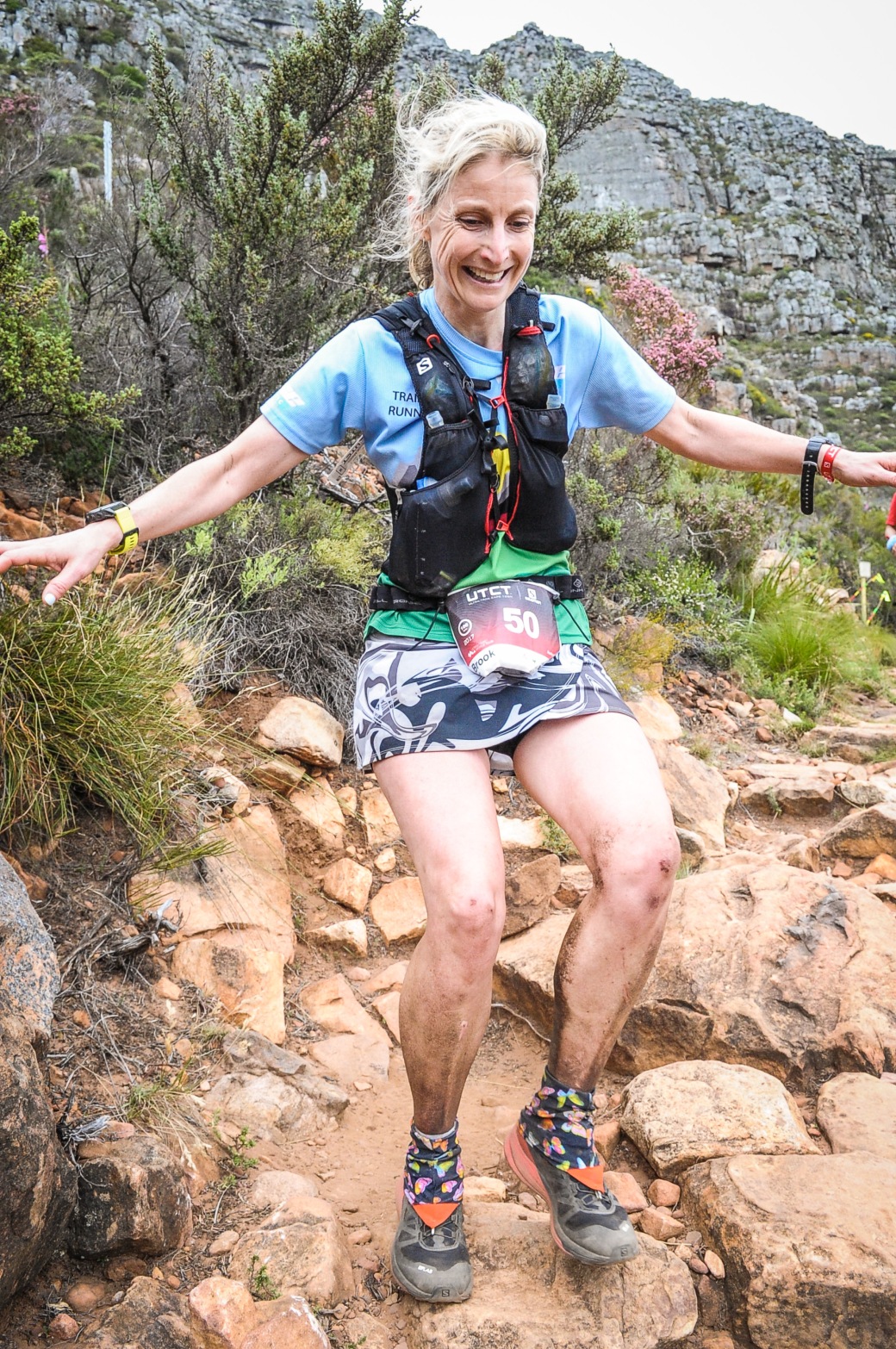 I was in a world of hurt, but it was really exciting to be in a position where I was fighting for a place against a seriously good runner (Teresa was 11th at UTMB). I caught sight of her again, but couldn’t quite bridge the gap by that finish line.

What a crazy, spectacular experience! I finished and Sally was there to hug me which was wonderful. Teresa and Andrea Huser (Swiss trail legend) came up and shook my hand. Total fan girl moment! And then Rocco snagged us a pic with Ryan Sandes which was pretty awesome 🙂 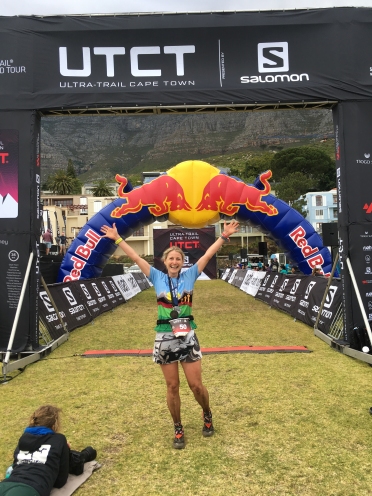 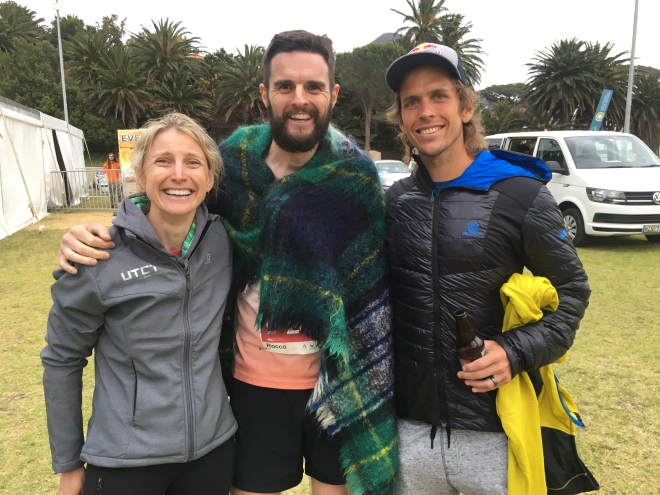 Biggest lesson of the race… never underestimate how terrain can dictate the challenge/pace of a race. Biggest success of the race… I never had a mental ‘quit’ moment. I was able to push just below the ‘red line’ the whole day. It’s a scary place to stay. It feels terrible and you’re never sure if you can hold on.

I’m grateful to have seen some amazing parts of the world on foot in 2017. To my friends, family and mentors—Thank you for cheering me on!