This is too long winded….sorry. Feel free to give up halfway. Unfortunately there’s no belt buckle, if you get to the end!

I ventured into the insane ultra world in 2014, with my first Blue Mountains UTA50 (previously NorthFace50). I had no idea that 4 years on, I’d continue to be fascinated by the challenge each race presents.

Every year, I’ve managed to improve my UTA100 time. One year that won’t be possible and I was really hoping that 2018 was not that year.

It seems that when I finish a race, my level of ‘happy’ is closely linked to whether I believe I gave it everything I had, on the day. As I write this (it’s less than 36hrs since I finished), I’m honestly not sure whether I managed that this year. I came pretty damn close, but there were a few patches of indulging in the pity fest.

The lead up to UTA this year, was pretty great. I was able to stay on top of the niggles and had a confidence boosting Mt Solitary race, 6 weeks prior. I was super excited that Mum, Toy Martin, was going to run the Pace22 race on the Friday.

I went to the start of Mum’s race to ‘hold the towel’. We were laughing because everyone kept telling her she was an ‘inspiration’. I’ll be honest, watching her toe the line, ready to battle forward as fast as possible, was bloody amazing. She killed it. 3hrs34min and 7th in the 60+ Women (shhhh…don’t tell anyone, she’s 71). Watching her charge up the finish chute with our friends and the crowd going nuts, was thrilling. 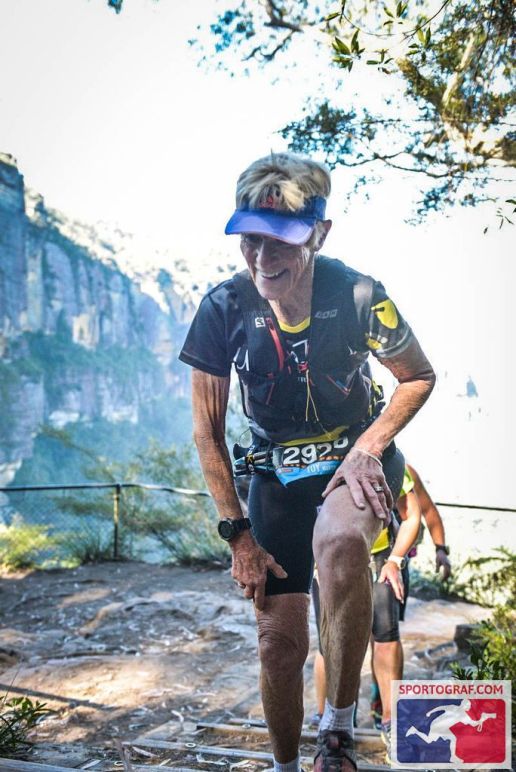 Saturday morning. We headed off to the start with my oldest friend Danielle. We found our crazy mates who were headed out for a fun-filled day of adventure. If you could harness the nervous energy at the start of one of these things, you could power a small nation!

Off we set and I tried to follow Hanny’s (mentor extraordinaire) advice. Start with purpose. My plan for the day was to maintain a strong effort through to the 57km mark (lots of fire trail running) and then see what I had to play with from there. This was a less conservative approach than I usually have, but if I wanted to improve on a great time last year, I was going to have to back myself and be brave.

I thought I stayed well below to red line along Narrowneck and over to Dunphys (31km). I didn’t think I was working too hard and felt stronger than I have in past years. Oh how quickly fortunes swing!

Up Ironpot Ridge to hear the didgeridoo and I thought, just back off a little…. apply the Hanny 5% reduction of effort rule. And then it became a 10% reduction in effort…… can you guess where this is going?

Problem solving mode came into full effect and I tried to remain calm while getting some gel and fluids in. I was worried I’d run myself into a bit of a hole. My quads had been replaced with concrete blocks and I shuffled along Green Valley and tried to avoid being demoralised as multiple girls hiked passed me smiling and chatting. 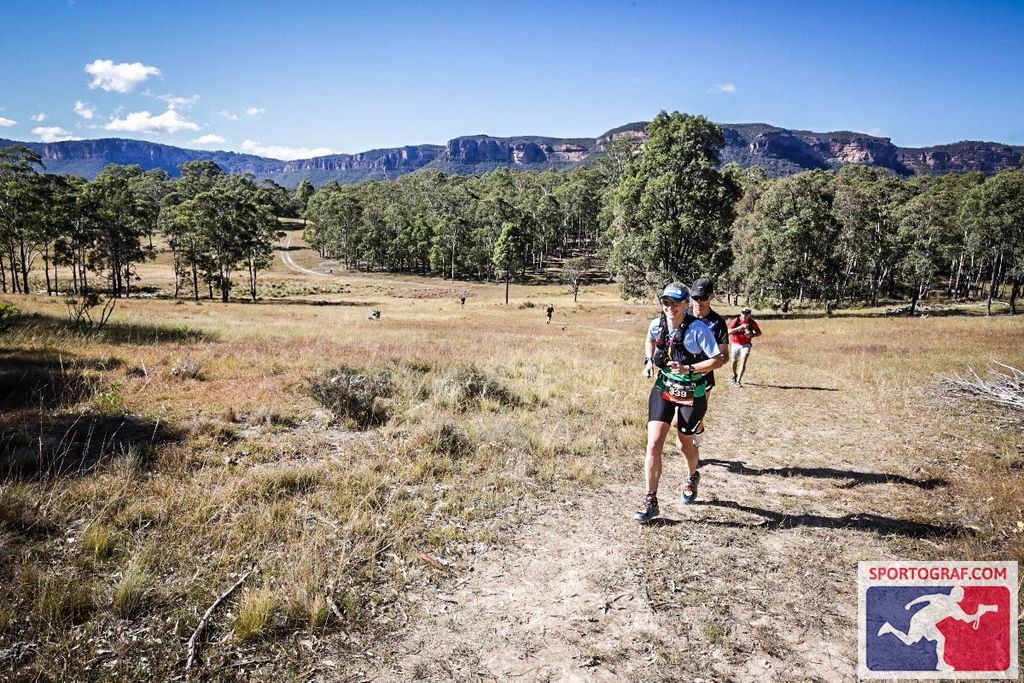 Into Six Foot (46km) and Support Crew Champ Mum was there along with some smiley mates. Not sure my fake smile was super convincing but I was in and out quick and felt like a professional. Fake it till you make it, right?

Over to the Nellies Glen slog. Felt sluggish but distracted myself chatting to my mate Rob who looked to be in a Battle Royale. I yelled unsolicited advice at him —“don’t you dare quit Rob”—the verbalisation was as much for my benefit as his!

Into Aquatic Centre (57km). Was trying hard to not say anything negative. I let out a tiny “in bit of trouble” to Mum and suddenly I was teary. It was shocking. I’m really not a crier and it scared the pants off me! Brady (my friend Danielle’s young son looked worried) and I thought I’d best pull myself together. As I walked out I turned to say thank you to Mum…. also something I don’t think I’ve ever managed to remember to say mid race. Things were definitely a little pear-shaped!

I’ll just take a moment here to mention the liquid gold fluid that is Coke. It took me from near tears to 20mins later, high five-ing my mate Russ. It’s crazy how you can come back to life if you can just hang in long enough, to sort the nutrition.

Through the ladders and stairs and while I was no Lucy Bartholomew, it was feeling less like a death march. Got to see my friend Daniela and she perked me up to no end being bright and bouncy and lying nicely about how strong I looked!

Through the Fairmont Golf Course (69km) and more friends (Jane and Lisa) lifted my spirits. It’s awesome to hear your mates cheering, especially when they know exactly what you’re going through.

I really felt like I was coming out on top…..but alas, this roller coaster of a day had other plans!

Got a little wobbly down to Wentworth Falls and then struggled towards the death road that is Kings Tableland. Ran next to a nice man who said “I’m too old for this sh@#$!” I couldn’t even smile, but I totally agreed with him!

Into the Hospital (78km) and I was ratty. Forgot to take watermelon even though Mum had it perfectly laid out for me. Forgot to smile. Forgot to go to the bathroom. Left there promising myself that I just had to get across the valley for a few hours and it’d all be over.

About a third of the way down Kedumba it literally went to “sh@$%@!”. Sorry for the gory details! There was an emergency bathroom break with cramping quads and a very unhappy tummy. In retrospect, I got something wrong. Too much salt? Too much caffeine? Pushing too hard? I’ve never had this issue before. It’s nice to mix it up… I’m normally the puking queen. Got shuffling again and then started puking to add to the fun! This is SUCH a great sport 😉

I actually improved after emptying my body of everything. I took poles for the first time ever from the Hospital and I may still be in that valley without them. Again the roller coaster improved and I started interacting with those inspiring and brave 50km souls that were out there battling their way to an epic finish.

A fast 100km man passed me and said, “you’ve got 2 girls about 5 mins back”. There was no calm positivity left. I was panicked and throwing everything I had at it, but I just felt so slow! I had no idea what place I was…. I just knew I didn’t want to get passed in the last 9km.

Darkness fell and I finally hit Federal Pass. There was a guy that sounded fast behind me and I told him to pass if he wanted, but he said he couldn’t. We kept picking up 50km people. They were all doing an amazing job of jumping out of the way, except they kept turning to look straight at us with their head torches to say congratulations. Between the regular blinding and legs that weren’t responding to my brain instructions to run faster, there were some very close calls nearly falling off the mountain side!

Onto the bottom of those Furber steps. I put my head down and promised myself if I hardened up, it’d be over in less than 18mins.

We got a little held up on the last ladders as the 50km and 100km runners converged. We were being drawn to the finish lights like mindless moths.

My beautiful friends were screaming for me in the dark and it was done.

6th girl. 12hrs34min. A PB by 6mins. Was ok at the finish for about 5mins and then the body decided to have a little dummy spit. The medical team and Mum were just outstanding and got me sorted in no time. The anti-nausea tablet was a gift from heaven.

I’m not sure why the day was such a tough battle for me. I struggled mentally and physically a lot more than I have in the past. Re-reading this report, I seemed to have dwelled in the dark place for too long on race day. But you live and learn.

My Mum is a hero.

My running mates are tough, positive people. HUGE congrats to everyone who was brave enough to toe the 22, 50 and 100km start lines.

It’s not over until some hoarse announcer calls your name in the dark. Have faith.

I’m a lucky girl to have a body/mind that let’s me experience gnarly days.